We both grew up in the countryside where animals were a part of our everyday lives.

My (Anders’) favorite cat was Snow White, a Black cat with white stripes, who by the way gave birth to a white kitten one morning, a few cm from my ear.

The kitten was not quite common, and was of course named Xantippe, named after Socrates’ wife who was both tough in speech and deed – which suited the kitten very well.

And after we moved away from home, we both had cats.

The first cat we had together was PET, a Siamese of the old type, and a very independent cat.

Now, it may come as a surprise to have a cat named PET, but in fact it is named after a computer and not the abbreviation of  “Danish Police Intelligence Service”.

This was because the first computer I bought while I was studying was a small 25 Kgs machine with as many as 2 tape drives – a Commodore Pet.

When the computer was subsequently resold, and we got the Siamese cat, yes, it was named after the computer that I missed (although of course I had a new computer)

Incidentally, the last thing I heard about the old computer was that in 2002 it lived on in Germany.

We had PET for 17 years until he could no longer because of arthritis.

He was in many ways a cat, which we also today compare our cats with, as he left such a mark on our family. And then he was by no means unintelligent, but still special.

By the way, he was the first cat we had who got used to dogs early, and they got used to him.

Both our own dogs, but also the dogs of parents and acquaintances quickly learned to have respect for our cats.

Unfortunately, we do not have pictures of all our cats, so there are some that I quickly skip, because it is not a story hour.

In addition to some domestic cats from boarding schools, we have bla. had a blue English Brite who was called Mulle as his tribal name was so complicated to pronounce that we gave up pronouncing it.

Mulle, on the other hand, is the cat who has drawn the most attention to herself, in the negative way.

In everyday speech, he was often referred to as the stupid, among others. because he has performed wanting to drink from our garden basin, fell in and swam over to the other side. For then right after repeating it all 2 more times.

He really did not have many pieces to move with, and is probably the reason why we did not choose to continue with Brite.

Thor was our first Maine Coon and he is the reason we have chosen to breed Maine Coon.

Just as the Siamese PET marked itself in our lives, so did Thor. 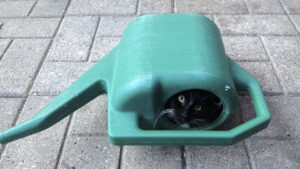 As a kitten, he was very active, and very aware of what was happening. But also very curious.

Which probably sometimes got him in a bit of trouble, especially when he got too high up. He is also the only one of our cats who has been able to walk up ladders. He never found out to go down the ladder again, but almost ran down.

But he was an incredibly loving cat who is still much missed. In many ways he has managed to overshadow our Siamese pet as he had a very strong personality and the absolute most intelligent cat we have had.

Some traits that have clearly made us fall in love with the Maine Coon breed.

And then we have for many years been to large animals, such as. Labador, Golden Retriever and Orpington chickens (where a cleaned slaughtered chicken weighs about 2300g).

And the reason we chose to get a Maine Coon for the first time was that home care ran a little fast up and down the road. So we had to have a cat that the cars would drive around – and that requires a big cat.

Thor is also the only cat we have had who has had his own bell.

For the first part of his life, Thor was a free runner. In other words, a cat that is allowed to run free, without being in aviaries.

To help him signal that he would like to go out, we set the clock up to him. The other way he showed that he wanted to go out was to knock a flowerpot down from the windowsill – while he was looking at us.

Unfortunately, we ended up having to remove the clock again anyway, because when he had just come in – he wanted to go out again.

But he used the clock to signal that he would like more food, or e.g. more water. It happened by ringing the bell and then running to what he wanted.

It took him 1 day to learn what the bells could be used for, and he found out for himself what it  could also be used for. Ring the bell – and run to the water bowl, to request more water.

He is simply the reason we fell in love with the breed, although we do not expect any of his successors to be on par with his way of being.

Unfortunately we had to say goodbye to Thor while we had Sasquash as a kitten.

Thor had become ill, and it turned out shortly after the picture where he was lying under the duvet, and that was wrong with his kidneys. After both diet change and trials, it unfortunately turned out in the end that it was no longer the cat we knew. He was quite easily tormented.

Luckily the vet came to our house and put him to sleep.

For sure – he was one of the our pets, I was most sorry to say goodbye to.